Celebrated February 2.
Imbolc is also known as Candlemas, Imbolg, Brigit’s Day, Feast of Brighid, Lupercus, The Festival of Lights, and the Feast of the Virgin.
Imbolc is the festival of the lactating sheep. It is derived from the Gaelic word “oimelc” which means “ewes milk”. Herd animals have either given birth to the first offspring of the year or their wombs are swollen and the milk of life is flowing into their teats and udders. It is the time of Blessing of the seeds and consecration of agricultural tools. It marks the center point of the dark half of the year. It is the festival of the Maiden, for from this day to March 21, it is her season to prepare for growth and renewal. Brighid’s snake emerges from the womb of the Earth Mother to test the weather, (the origin of Groundhog Day), and in many places the first Crocus flowers began to spring forth from the frozen earth.
The Maiden is honored as the Bride on this Sabbat. Straw corn dollies are created from oat or wheat straw and placed in baskets with white flower bedding. Young girls then carry them door to door, and gifts are bestowed upon the image from each household. Afterwards at the traditional feast, the older women make special acorn wands for the dollies to hold, and in the morning, the ashes in the hearth are examined to see if the magic wands left marks as a good omen. Brighid’s Crosses are fashioned from wheat stalks and exchanged as symbols of protection and prosperity in the coming year. Home hearth fires are put out and re-lit, and a besom is place by the front door to symbolize sweeping out the old and welcoming the new. Candles are lit and placed in each room of the house to honor the re-birth of the Sun.
Another traditional symbol of Imbolc is the plough. In some areas, this is the first day of ploughing in preparation of the first planting of crops. A decorated plough is dragged from door to door, with costumed children following asking for food, drinks, or money. Should they be refused, the household is paid back by having its front garden ploughed up. In other areas, the plough is decorated and then Whiskey, the “water of life” is poured over it. Pieces of cheese and bread are left by the plough and in the newly turned furrows as offerings to the nature spirits. It is considered taboo to cut or pick plants during this time. 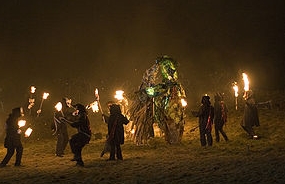 It seems quite impossible that the holiday of Candlemas should be considered the beginning of Spring. Here in the Heartland, February 2nd may see a blanket of snow mantling the Mother. Or, if the snows have gone, you may be sure the days are filled with drizzle, slush, and steel-grey skies — the dreariest weather of the year. In short, the perfect time for a Pagan Festival of Lights. And as for Spring, although this may seem a tenuous beginning, all the little buds, flowers and leaves will have arrived on schedule before Spring runs its course to Beltane.
‘Candlemas’ is the Christianized name for the holiday, of course. The older Pagan names were Imbolc and Oimelc. ‘Imbolc’ means, literally, ‘in the belly’ (of the Mother). For in the womb of Mother Earth, hidden from our mundane sight but sensed by a keener vision, there are stirrings. The seed that was planted in her womb at the solstice is quickening and the new year grows. ‘Oimelc’ means ‘milk of ewes’, for it is also lambing season.
The holiday is also called ‘Brigit’s Day’, in honor of the great Irish Goddess Brigit. At her shrine, the ancient Irish capitol of Kildare, a group of 19 priestesses (no men allowed) kept a perpetual flame burning in her honor. She was considered a goddess of fire, patroness of smithcraft, poetry and healing (especially the healing touch of midwifery). This tripartite symbolism was occasionally expressed by saying that Brigit had two sisters, also named Brigit. (Incidentally, another form of the name Brigit is Bride, and it is thus She bestows her special patronage on any woman about to be married or handfasted, the woman being called ‘bride’ in her honor.)
The Roman Catholic Church could not very easily call the Great Goddess of Ireland a demon, so they canonized her instead. Henceforth, she would be ‘Saint’ Brigit, patron saint of smithcraft, poetry, and healing. They ‘explained’ this by telling the Irish peasants that Brigit was ‘really’ an early Christian missionary sent to the Emerald Isle, and that the miracles she performed there ‘misled’ the common people into believing that she was a goddess. For some reason, the Irish swallowed this. (There is no limit to what the Irish imagination can convince itself of. For example, they also came to believe that Brigit was the ‘foster-mother’ of Jesus, giving no thought to the implausibility of Jesus having spent his boyhood in Ireland!)
Brigit’s holiday was chiefly marked by the kindling of sacred fires, since she symbolized the fire of birth and healing, the fire of the forge, and the fire of poetic inspiration. Bonfires were lighted on the beacon tors, and chandlers celebrated their special holiday. The Roman Church was quick to confiscate this symbolism as well, using ‘Candlemas’ as the day to bless all the church candles that would be used for the coming liturgical year. (Catholics will be reminded that the following day, St. Blaise’s Day, is remembered for using the newly-blessed candles to bless the throats of parishioners, keeping them from colds, flu, sore throats, etc.)
The Catholic Church, never one to refrain from piling holiday upon holiday, also called it the Feast of the Purification of the Blessed Virgin Mary. (It is surprising how many of the old Pagan holidays were converted to Maryan Feasts.) The symbol of the Purification may seem a little obscure to modern readers, but it has to do with the old custom of ‘churching women’. It was believed that women were impure for six weeks after giving birth. And since Mary gave birth at the winter solstice, she wouldn’t be purified until February 2nd. In Pagan symbolism, this might be re-translated as when the Great Mother once again becomes the Young Maiden Goddess.
Today, this holiday is chiefly connected to weather lore. Even our American folk-calendar keeps the tradition of ‘Groundhog’s Day’, a day to predict the coming weather, telling us that if the Groundhog sees his shadow, there will be ‘six more weeks’ of bad weather (i.e., until the next old holiday, Lady Day). This custom is ancient. An old British rhyme tells us that ‘If Candlemas Day be bright and clear, there’ll be two winters in the year.’ Actually, all of the cross-quarter days can be used as ‘inverse’ weather predictors, whereas the quarter-days are used as ‘direct’ weather predictors.

Like the other High Holidays or Great Sabbats of the Witches’ year, Candlemas is sometimes celebrated on it’s alternate date, astrologically determined by the sun’s reaching 15-degrees Aquarius, or Candlemas Old Style. Incidentally, some modern Pagan groups have recently begun calling the holiday itself ‘Brigit’, presumably as a shorthand for ‘Brigit’s Day’. This lexical laziness is lamentable since it confuses a deity-name for the proper name of the holiday. The same disconcerting trend can be seen in the recent practice of referring to the autumnal equinox as ‘Mabon’, which is more properly the name of a Welsh god-form.
Another holiday that gets mixed up in this is Valentine’s Day. Ozark folklorist Vance Randolf makes this quite clear by noting that the old-timers used to celebrate Groundhog’s Day on February 14th. This same displacement is evident in Eastern Orthodox Christianity as well. Their habit of celebrating the birth of Jesus on January 6th, with a similar post-dated shift in the six-week period that follows it, puts the Feast of the Purification of Mary on February 14th. It is amazing to think that the same confusion and lateral displacement of one of the old folk holidays can be seen from the Russian steppes to the Ozark hills, but such seems to be the case!
Incidentally, there is speculation among linguistic scholars that the vary name of ‘Valentine’ has Pagan origins. It seems that it was customary for French peasants of the Middle Ages to pronounce a ‘g’ as a ‘v’. Consequently, the original term may have been the French ‘galantine’, which yields the English word ‘gallant’. The word originally refers to a dashing young man known for his ‘affaires d’amour’, a true galaunt. The usual associations of V(G)alantine’s Day make much more sense in this light than their vague connection to a legendary ‘St. Valentine’ can produce. Indeed, the Church has always found it rather difficult to explain this nebulous saint’s connection to the secular pleasures of flirtation and courtly love.
For modern Witches, Candlemas O.S. may then be seen as the Pagan version of Valentine’s Day, with a de-emphasis of ‘hearts and flowers’ and an appropriate re-emphasis of Pagan carnal frivolity. This also re-aligns the holiday with the ancient Roman Lupercalia, a fertility festival held at this time, in which the priests of Pan ran through the streets of Rome whacking young women with goatskin thongs to make them fertile. The women seemed to enjoy the attention and often stripped in order to afford better targets.
One of the nicest folk-customs still practiced in many countries, and especially by Witches in the British Isles and parts of the U.S., is to place a lighted candle in each and every window of the house (or at least the windows that faced the street), beginning at sundown on Candlemas Eve (February 1st), allowing them to continue burning until sunrise. Make sure that such candles are well seated against tipping and guarded from nearby curtains, etc. What a cheery sight it is on this cold, bleak and dreary night to see house after house with candle-lit windows! And, of course, if you are your Coven’s chandler, or if you just happen to like making candles, Candlemas Day is the day for doing it. Some Covens hold candle-making parties and try to make and bless all the candles they’ll be using for the whole year on this day.
Other customs of the holiday include weaving ‘Brigit’s crosses’ from straw or wheat to hang around the house for protection, performing rites of spiritual cleansing and purification, making ‘Brigit’s beds’ to ensure fertility of mind and spirit (and body, if desired), and making Crowns of Light (i.e. of candles) for the High Priestess to wear for the Candlemas Circle, similar to those worn on St. Lucy’s Day in Scandinavian countries. All in all, this Pagan Festival of Lights, sacred to the young Maiden Goddess, is one of the most beautiful and poetic of the year.

22bet Norge is one of the best Norwegian bookmakers.